There are three things in my life I am really passionate about: my friends, my work and my horses. That last one still shocks me.

Horses and riding did not come naturally to me. My aunt had a pony when I was little, my cousin had a horse. Neither were well behaved and both terrified me. The last time I had gotten on an equine that wasn’t wooden and riding in circles I was probably 8 or 9. As far as I was concerned they were “big scary monsters”intent on turning humans into lawn darts. Not to mention the older I got the healthier my respect for how hard the ground is has become. I don’t bounce well.

So nearly four years ago, at age 41, when a good friend asked me to go with her to a riding lesson I laughed at her. I was NEVER getting on a horse! But she had a living social coupon and was persistent so I finally gave in. I assumed one of three things would happen: I’d get killed and it wouldn’t matter, I’d hate it and live through it and never have to do it again or I wouldn’t even make it on the horse and that would be that. Any of the three meant it was done and over. I would NEVER have to do it again.

We got to the barn and we were greeted by the riding instructor, Etta. She brought in this old flea bit (that is a coloring I soon learned) Appaloosa named Snapper. If you have never met a lesson horse they are truly angels in hooves. Snapper has taught dozens if not hundreds of kids to ride, he has been painted, pulled on, and things I am sure keep a gelding up at night. But he was so good at his job. I was taught to groom and saddle him, all the time me thinking “why is she showing me this I am NEVER doing this again”. Because of nerve damage I have in my right side, another story for another day, mounting was very hard for me. But Snapper and Etta both persisted and we got me on the horse. He took one step and I screamed. But somewhere between that scream and dismounting an hour later my life changed. I found the magic that only a horse is capable of. I came back a week later and haven’t stopped riding since.

Once I got hooked I wanted to understand more about this horse world. My instructor showed Western Pleasure so I decided to go watch. I sat in the stands with my best friend and said I would NEVER show a horse. I entered my first show a year later on my lease horse Joker, again I was hooked.

I was going to ride and show Joker forever was my plan, I was NEVER going to buy a horse of my own. In May of 2013 I bought a cute little Quarter Horse I named B’sheret (hebrew for meant to be). Unfortunately he turned out to be a life lesson in ‘everything for a reason’. He had some health issues and we had to return him a month later. 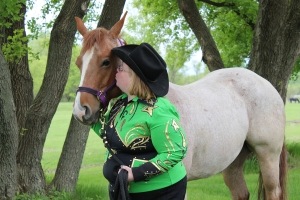 In November of 2013 I found the love of my life Jasmine (Iza Cute Cowgirl). She was all the things I NEVER was going to buy. I wanted a short, very colored, gelding (male), young Appaloosa. Jasmine is a very tall (16.1 hands), primarily solid with some snow flakes, mare (female) Appaloosa. She is everything my heart needed and I still all these months later find myself staring at her in awe. Jas has a great resume and was previously shown at the world class level, but I was NEVER going to do that either (noticing a pattern yet??).

We found Jas through one of the top Appaloosa trainers in the country, Arturo Maestas. He has clients from all over the nation whose horses reside with him and the owners come in periodically to show and train. I did not understand how anyone could do that and have their horse so far away. You guessed it, I said I would NEVER do that either. Why would you have a horse you couldn’t ride and see every day?

Five months ago I found myself back in Texas to just take one lesson and get an evaluation of my riding. Now I fly in monthly to take lessons from Arturo and started dreaming about making it to worlds, just once. I was riding another saint of a horse, Smoke, but was NEVER going to buy a second horse (wait for it, wait for it). While I knew quickly Jas wasn’t going to be my national horse I would lease one or something.

Two weeks ago I was in Texas and the conversation turned to needing to find a horse I could ride there. Smoke needed to focus on his owner and their show goals, and a horse just happened to be on the market who might be a good fit. In the span of a very crazy 24 hours I became the owner of Stuart Bundy (Born to Bet). In a twist of fate that still makes me giggle he is everything that I was looking for when I found Jas. He is young, he is loudly colored and he’s a he, he is tall, about the same as Jas, but other that being a bit taller than planned, he is the dream I dreamed 18 months ago.

It would be easy to look at Stuart and think “why not then” but the lesson Stewey has already taught me is about readiness. Had I tried to do in 2013 with what I am now starting with Stewey, I wouldn’t have been ready and would have failed miserably. I needed that time and experience to become ready emotionally, to become ready financially and to become ready as a rider. I had lessons that I needed to get through to be ready to full take advantage of this next journey. Had Stuart come into my life too soon I would not have stood a chance at succeeding with him. I needed the right experience behind me and the right people around me to fully embrace this next stage in my horse history.

I find great irony in all this because readiness is actually the topic I had already planned to do next in the blog. So I will save diving deep into that area for now but will share my recent horse lesson on readiness. I learned, through Stewey, that ready is as much an emotion as it is a state of being.